If you’ve been in the dating shark-pool recently, you know ghosting happens when someone suddenly stops all communication, without warning or apology. I like to quote The Lord of the Rings to describe the consequences of ghosting:

“The way is shut. It was made by those who are Dead, and the Dead keep it.”

When you ghost someone, you close doors in your face, and those doors will stay closed until you fix your ghostly ways. But is ghosting becoming the new normal?

As a service professional, I get ghosted a lot. People who sent inquiries—heck, even people who gave the green light to start work—suddenly act as if they have been kidnapped by orcs or jettisoned into space. First I think, “Is that person OK?” Then, “Did I do something wrong?” Eventually I get the hint, and I wonder why my ghoster wasn’t professional enough to send a simple, “Thanks, but no thanks.” Ghosting deeply changes how I think of someone.

Professional ghosting is hurtful when you’re on the receiving end, but it can destroy your reputation if you’re the one doing the ghosting. And unfortunately, ghosting of dates, colleagues, service professionals, even prospective employers, is on the rise.

It’s your prerogative to decide that you don’t want to work with someone, or that a project isn’t a good fit. In this moment, it may feel easier to ghost. It’s certainly easier to disappear from an uncomfortable situation than to have a difficult conversation that might hurt someone’s feelings. You hope your ghostee will figure out you’re not interested and will just go away. Of course, they might figure this out after you ignore ten “I’m just following up again” emails, because they are professional and expect you to be professional, too. “Ignoring” is something 6-year-olds do.

How professional ghosting hurts you

Mature people are able to face challenging conversations. But when you inexplicably disappear and refuse to respond to repeated attempts at communication? This says you avoid conflict, can’t communicate honestly, and maybe—just maybe—don’t understand how disrespectful ghosting is. People don’t like being turned down, but they will respect you for doing it with professional courtesy; they will always think less of you when you leave them in limbo.

When you ghost, your character suffers. You show that you:

And when you ghost, your career suffers. You face consequences like:

You’d better believe if you professionally ghost someone and you don’t make it right, your ghostee will remember. You’re the $200-a-plate wedding guest who replied “Yes” and never showed up. You will always be that person who wasn’t confident or honest or respectful enough to simply decline.

How to avoid ghosting someone

Put on your big boy/girl pants! Yes, networking can be a strange social dance. And yes, it’s hard to tell people “No.” But a true professional responds, follows up, and sees things through to the end, even if that end is telling the other person you no longer wish to move forward.

When it doesn’t make sense to continue a business relationship, it’s time to politely decline. We all get busy, change jobs, or move in a different direction, so when that person reaches out to discuss the next steps in your negotiation or to have lunch again, just say “Thanks, but I’m not interested at this time.” And I’ll tell you from my point of view, when someone politely declines instead of disappears, I respect them and stay open to working with them in the future. When I am ghosted, the way is shut.

If you have ghosted someone and want to fix it

We all make mistakes. Take responsibility for yours with a polite email:

“I’m so sorry for the late response; this email should have gotten to you sooner. Unfortunately, I’ve decided to go in another direction, but thank you so much for your efforts, and I will keep in touch for future endeavors. Thanks again!”

Even a delayed message gives closure for the connection that didn’t work out, and can open a door for future opportunities that would otherwise have remained closed. It’s never too late to make things right.

This isn’t Tinder. Professional ghosting is a terrible long-term strategy that closes doors you haven’t even approached yet.

Don’t let a moment of weakness close doors for you! A simple email saying, “Thank you, but I’m pursuing another opportunity,” takes seconds to write, and can protect your entire professional future. Show you’re mature, honest, and respectful enough to follow through on your affairs. No one will hold it against you for going in a different direction, but they will if you disappear without a trace. Not even Gandalf can save you then! 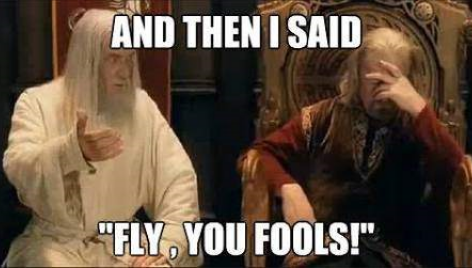 Is ghosting the new normal? Have you been professionally ghosted? Share your thoughts in the comments!