Fuzzy in the News 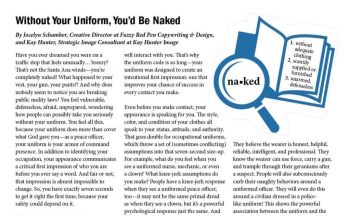 I was blessed to contribute this article to Courier, a publication by the Association of Orange County Deputy Sheriffs. It’s all about the psychology of uniforms and how officer safety relies on the uniform to make a good first impression. It was so fun to use my public-service background to write this piece! I hope y’all at OCSD loved this. (Special nod to my friend Kay on this one.)

Click the images to read the magazine layout, or scroll down for the text-only version. 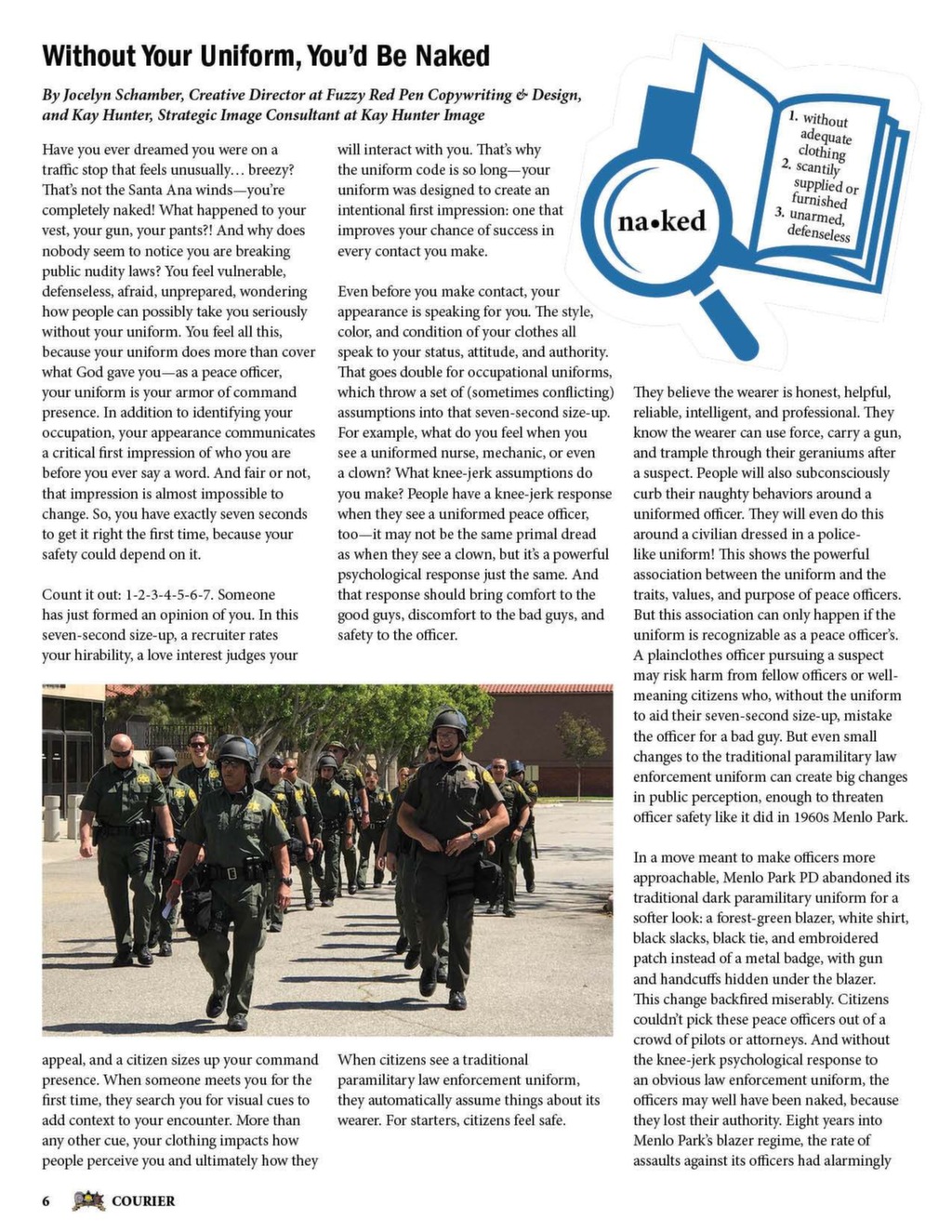 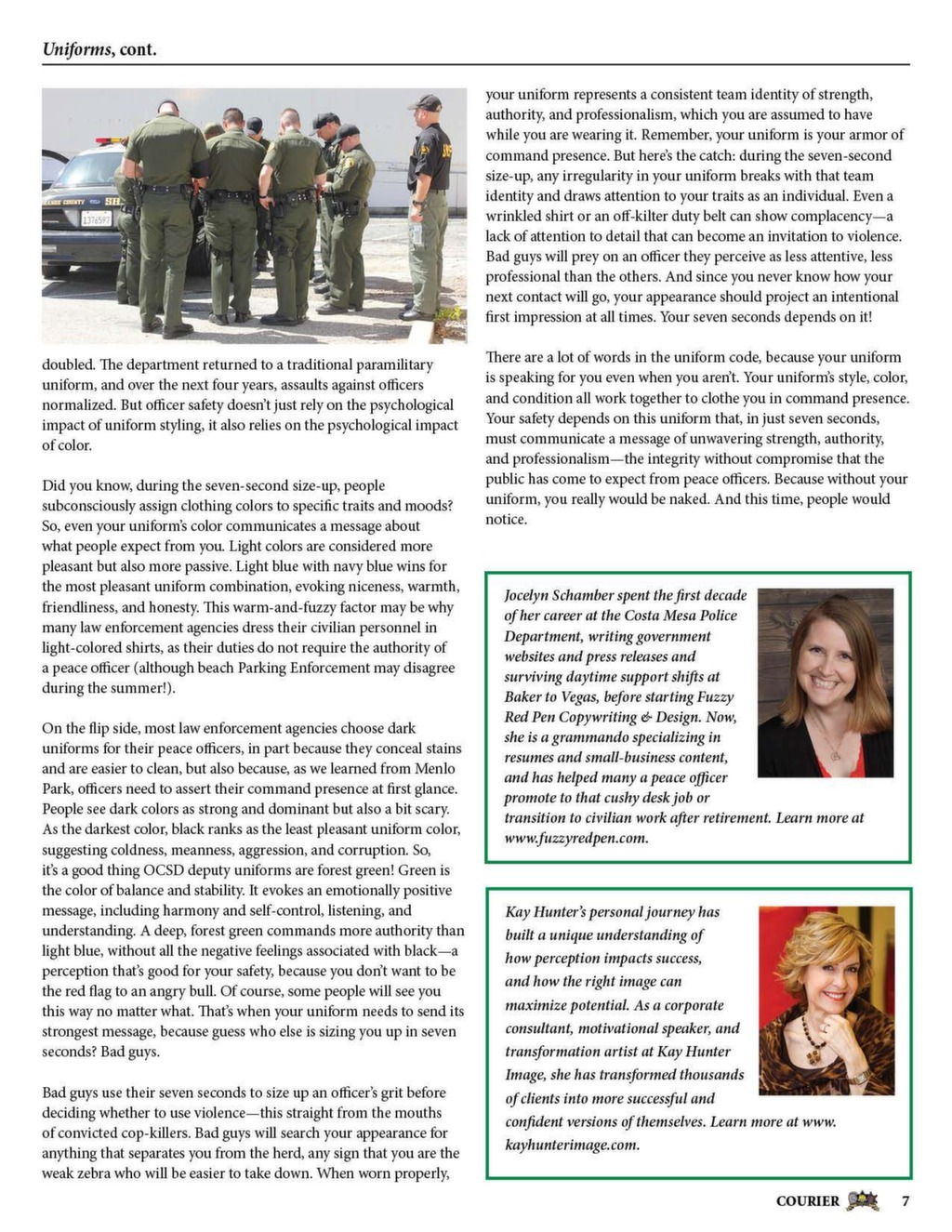 Without Your Uniform, You’d Be Naked

Have you ever dreamed you were on a traffic stop that feels unusually . . . breezy? That’s not the Santa Ana winds—you’re completely naked! What happened to your vest, your gun, your pants?! And why does nobody seem to notice you are breaking public nudity laws? You feel vulnerable, defenseless, afraid, unprepared, wondering how people can possibly take you seriously without your uniform. You feel all this because your uniform does more than cover what God gave you—as a peace officer, your uniform is your armor of command presence. In addition to identifying your occupation, your appearance communicates a critical first impression of who you are before you ever say a word. And fair or not, that impression is almost impossible to change. So you have exactly seven seconds to get it right the first time, because your safety could depend on it.

Count it out: 1-2-3-4-5-6-7. Someone has just formed an opinion of you. In this seven-second size-up, a recruiter rates your hirability, a love interest judges your appeal, and a citizen sizes up your command presence. When someone meets you for the first time, they search you for visual cues to add context to your encounter. More than any other cue, your clothing impacts how people perceive you and ultimately how they will interact with you. That’s why the uniform code is so long—your uniform was designed to create an intentional first impression: one that improves your chance of success in every contact you make.

Even before you make contact, your appearance is speaking for you. The style, color, and condition of your clothes all speak to your status, attitude, and authority. That goes double for occupational uniforms, which throw a set of (sometimes conflicting) assumptions into that seven-second size-up. For example, what do you feel when you see a uniformed nurse, mechanic, or even a clown? What knee-jerk assumptions do you make? People have a knee-jerk response when they see a uniformed peace officer, too—it may not be the same primal dread as when they see a clown, but it’s a powerful psychological response just the same. And that response should bring comfort to the good guys, discomfort to the bad guys, and safety to the officer.

When citizens see a traditional paramilitary law enforcement uniform, they automatically assume things about its wearer. For starters, citizens feel safe. They believe the wearer is honest, helpful, reliable, intelligent, and professional. They know the wearer can use force, carry a gun, and trample through their geraniums after a suspect. People will also subconsciously curb their naughty behaviors around a uniformed officer. They will even do this around a civilian dressed in a police-like uniform! This shows the powerful association between the uniform and the traits, values, and purpose of peace officers. But this association can only happen if the uniform is recognizable as a peace officer’s. A plainclothes officer pursuing a suspect may risk harm from fellow officers or well-meaning citizens who, without the uniform to aid their seven-second size-up, mistake the officer for a bad guy. But even small changes to the traditional paramilitary law enforcement uniform can create big changes in public perception, enough to threaten officer safety like it did in 1960s Menlo Park.

In a move meant to make officers more approachable, Menlo Park PD abandoned its traditional dark paramilitary uniform for a softer look: a forest-green blazer, white shirt, black slacks, black tie, and embroidered patch instead of a metal badge, with gun and handcuffs hidden under the blazer. This change backfired miserably. Citizens couldn’t pick these peace officers out of a crowd of pilots or attorneys. And without the knee-jerk psychological response to an obvious law enforcement uniform, the officers may well have been naked, because they lost their authority. Eight years into Menlo Park’s blazer regime, the rate of assaults against its officers had alarmingly doubled. The department returned to a traditional paramilitary uniform, and over the next four years, assaults against officers normalized. But officer safety doesn’t just rely on the psychological impact of uniform styling, it also relies on the psychological impact of color.

Did you know, during the seven-second size-up, people subconsciously assign clothing colors to specific traits and moods? So even your uniform’s color communicates a message about what people expect from you. Light colors are considered more pleasant but also more passive. Light blue with navy blue wins for the most pleasant uniform combination, evoking niceness, warmth, friendliness, and honesty. This warm-and-fuzzy factor may be why many law enforcement agencies dress their civilian personnel in light-colored shirts, as their duties do not require the authority of a peace officer (although beach Parking Enforcement may disagree during the summer!).

On the flip side, most law enforcement agencies choose dark uniforms for their peace officers, in part because they conceal stains and are easier to clean, but also because, as we learned from Menlo Park, officers need to assert their command presence at first glance. People see dark colors as strong and dominant, but also a bit scary. As the darkest color, black ranks as the least pleasant uniform color, suggesting coldness, meanness, aggression, and corruption. So it’s a good thing your uniform is forest green! Green is the color of balance and stability. It evokes an emotionally positive message, including harmony and self-control, listening and understanding. A deep, forest green commands more authority than light blue, without all the negative feelings associated with black—a perception that’s good for your safety, because you don’t want to be the red flag to an angry bull. Of course, some people will see you this way no matter what. That’s when your uniform needs to send its strongest message, because guess who else is sizing you up in seven seconds? Bad guys.

Bad guys use their seven seconds to size up an officer’s grit before deciding whether to use violence—this straight from the mouths of convicted cop-killers. Bad guys will search your appearance for anything that separates you from the herd, any sign that you are the weak zebra who will be easier to take down. When worn properly, your uniform represents a consistent team identity of strength, authority, and professionalism, which you are assumed to have while you are wearing it. Remember, your uniform is your armor of command presence. But here’s the catch: during the seven-second size-up, any irregularity in your uniform breaks with that team identity and draws attention to your traits as an individual. Even a wrinkled shirt or an off-kilter duty belt can show complacency—a lack of attention to detail that can become an invitation to violence. Bad guys will prey on an officer they perceive as less attentive, less professional than the others. And since you never know how your next contact will go, your appearance should project an intentional first impression at all times. Your seven seconds depends on it!

There are a lot of words in the uniform code, because your uniform is speaking for you even when you aren’t. Your uniform’s style, color, and condition all work together to clothe you in command presence. Your safety depends on this uniform that, in just seven seconds, must communicate a message of unwavering strength, authority, and professionalism—the integrity without compromise that the public has come to expect from peace officers. Because without your uniform, you really would be naked. And this time, people would notice.

Jocelyn Schamber spent the first decade of her career at the Costa Mesa Police Department, writing government websites and press releases and surviving daytime support shifts at Baker to Vegas, before starting Fuzzy Red Pen Copywriting & Design. Now she is a grammando specializing in resumes and small-business content, and has helped many a peace officer promote to that cushy desk job or transition to civilian work after retirement. Learn more at www.fuzzyredpen.com.

Kay Hunter’s personal journey has built a unique understanding of how perception impacts success, and how the right image can maximize potential. As a corporate consultant, motivational speaker, and transformation artist at Kay Hunter Image, she has transformed thousands of clients into more successful and confident versions of themselves. Learn more at www.kayhunterimage.com.

Cersei Lannister said it best: "When you play the game of thrones, you win or... Read More